With the body as our tool and curiosity as our ally we will enter into a world of fantasy, play and discovery.
What is dance?

In this lesson, we will restore the body into our consciousness and ask questions such as:

We will work with simple instructions that will move us under the reliable guidance of sensory enjoyment. We will explore how this concept opens up new understanding of the world within us and beyond.

We will give the body the opportunity to trust itself, sometimes with the help of imagination and sometimes through simple movement instructions that introduce gravity, inertia and kinetic energy.

We will work in duets, trios and groups, offering each other the opportunity of physical contact as well as the sense of freedom offered by relationships of trust.
Getting to know our anatomy and its biomechanics, we will learn to interact with our own body, the bodies of others within the space, the space itself and often music!

Equip yourself with imagination and a mood for travelling into the wondrous world of the moving body and its infinite possibilities. 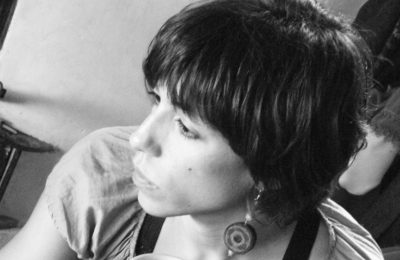 Natalie Mandila was born in Athens in 1981.

It was only after she finished with her academic studies at the Ionian university, that she engaged with dancing.

Her interest in movement has led her to get involved in different physical practices such as aikido, tai chi, yoga, acrobatics, dance, improvisation and somatics, practices that enrich the multifaceted concept of body and movement.

In 2010 she graduated from the State School of Dance in Athens, where she participated in dance performances of both emerging and established artists. Two years later Natalie moved to Corfu where until today, she teaches the sense of motion to different age groups and levels.

Over the last four years she has been collaborating with “Garage” – Performing Arts Center (@GaragePerformingArtsCenter) as a dance teacher and performer. An outcome of this collaboration is a solo project titled ‘Casp’, choreographed by Garage21.

Recently she began her apprenticeship with Zoe Valerie and her collaboration with Casa Lucia aiming to promote a change of consciousness concerning the body and physical education.

She has also collaborated with actor/director and animator Giorgos Nikopoulos who combines real action with animation and with Andreas Monopolies music producer and inventor.

As part of the Residency Program of GPAC she has been working on her first choreographic work, a union of three projects under the general title ‘Feral’, which discusses the notion of an “animal–human” hybrid. The first two projects have already been completed and presented to the public (“Feral”, Garage Performing Arts Center, Theseum Theatre, Athens), (“Feral in the woods”, Vida Laska Arts Festival).

Begin typing your search term above and press enter to search. Press ESC to cancel.